iRest, You Rest: Virtual yoga Nidra sessions to help fight stress - VAntage Point - blogs.va.gov
Yoga for all veterans (and civilians), their families and communities, especially those suffering from PTSD, is so important to support recovery and resilience Veterans Gratitude Week is November 8 – 18th. Look to this video series or find a yoga studio, veteran support group or clinic at your local VA that offers FREE mindful resilience yoga classes.
www.blogs.va.gov 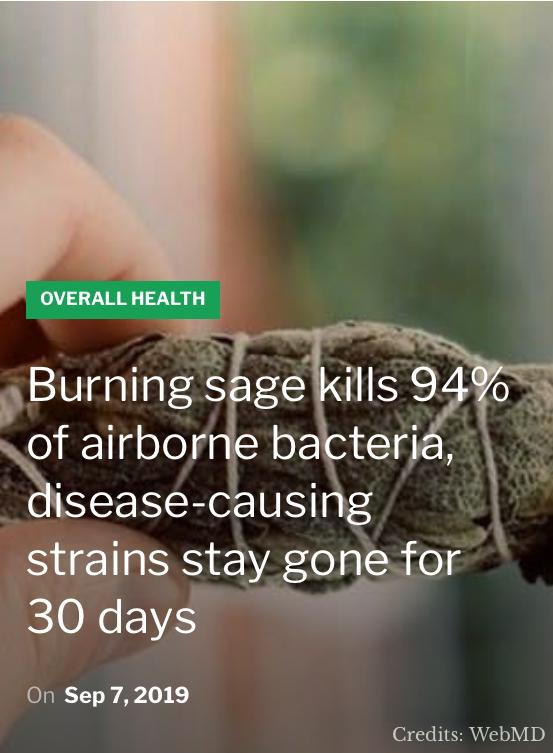 Burning sage kills 94% of airborne bacteria, disease-causing strains stay gone for 30 days
The ancient ritual of burning sage to purify the air turns out to be more than a superstition!

The Native American ritual of “smudging” or burning sage to clear the air of “bad energy” turns out to ward away more than just “negative vibes.”

A recent study showed burning the herb in a room for an hour reduced the number of airborne bacteria by a whopping 94%.

The room remained almost entirely disinfected for over 24 hours, and seven strains of disease-causing bacteria previously present in the room still could not be detected 30 days later.

”We have demonstrated that using medicinal smoke it is possible to completely eliminate diverse plant and human pathogenic bacteria of the air within confined space,” wrote the study’s authors, from the National Botanical Research Institute in India.

Sage is also used in herbal medicine internally as a powerful antiseptic and anti-inflammatory.

The smoke created by burning the plant is also used as an insect repellent.

So instead of an expensive air purifier, you might try sage instead! Also, open the curtains. Another study has shown sunlight to be another excellent disinfectant.